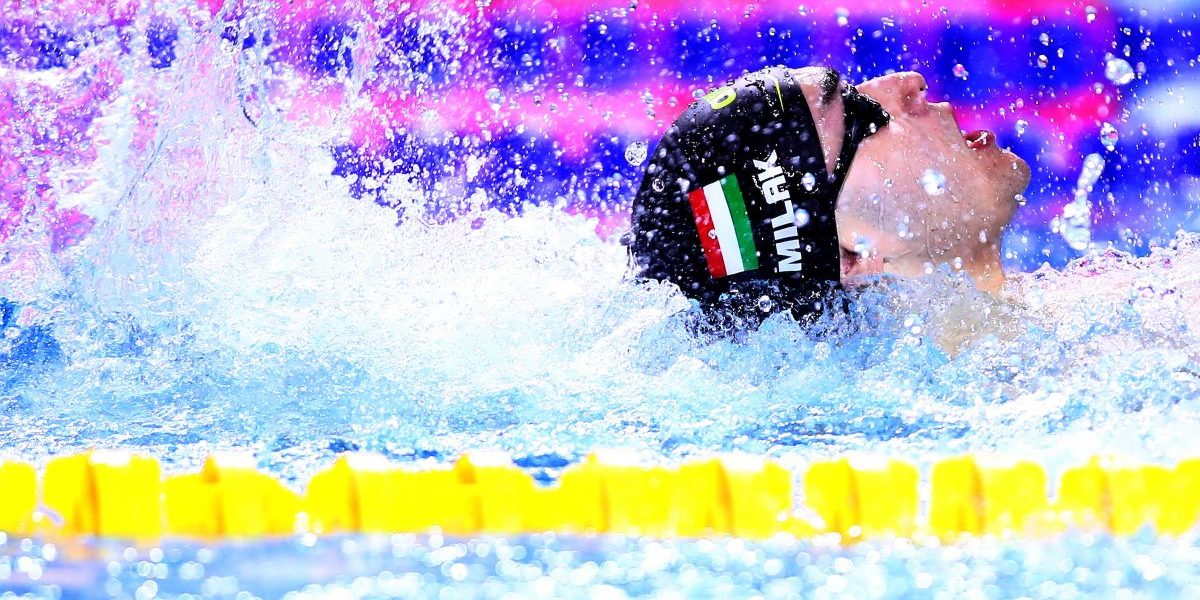 Rio Olympic champion and Tokyo silver medallist Kylie Chalmers offered an outstanding swim in the men’s 100m free on the second day in Budapest – this time he showed up with a normal outlook, downgraded the extreme extras from last week. Netherlands’ Kira Toussaint’s 100m back was a great effort in the women’s race, while the home crowd made some noise as butterfly specialist Kristof Milak came first in the 50m backstroke.

Aussie Kylie Chalmers admittedly paraded with a terrifying look in Berlin on Day 1, then got rid of his horrifying moustache on the following day. Here in Budapest, he won the 50m free while his whitish hair was still shining during the post-race interview but for today, he got back to completely normal. His head being almost shaved, the Rio Olympic champion came up with his best effort so far in this season, clocked 45.50, a 963-pointer, the top result on Friday, based on FINA points.

As for his evolving outlook, Kyle offered a straightforward explanation: “I love to keep people on their toes, keep them guessing” he laughed. “Last night I came with the blonde hair, then saw myself on the big screen, and thought: ‘it doesn’t look as good as it was five weeks ago’, so I did some face-trim and shave the hair at home. Now it’s time to start to regrow it and who knows what I’ll have for the Worlds.”

Though more importantly, his swimming was also evolving in this week, compared to Berlin.

“It is very challenging to regain the speed after the Olympics but in short-course luckily you don’t have to be as fit, it’s all about skills and having good turns and dives. For me that’s where my major focus is through this training period, and I can get better in the progress. It’s great to have the opportunity to race every weekend and I can think over what worked for me last time and what didn’t. To keep going that fast is awesome but I think I’ve got still more to give which is good.”

Among the women, Kira Toussaint delivered the swim of the day. The Dutch won the 100m back – some may say that it was easy as the top three from Berlin, ahead of her a week ago, did not compete here. But Toussaint clocked 55.72, a way better time than the winning effort in the first leg and this scored 955 points.

Some newcomers shook up the ranks in other events. Italy’s Ilaria Cusinato won the women’s 400m IM to push Berlin winner Zsuzsanna Jakabos of Hungary to the second place. Russia’s Nika Godun stepped in to pip Olympic champ Lydia Jacobi for the 100m breast title. And home hero Kristof Milak, while resting his pet 200m fly, opted to go back to his backstroker roots and to the delight of the home crowd, and to the astonishment of insiders, he won the 50m back with a great swim (later added a bronze in the 100m free and a silver in the mixed free relay).

And there were other races where not many things changed since last week. The men’s 200m IM produced the same order on the podium, South African Matt Slates delivered another title (though this time he was far from his fresh junior WR), ahead of Danas Rapsys (LTU) and Jakov Toumarkin (ISR). In the women’s 200m free, Aussie Madison Wilson had an even more confident victory in the 200m free against Slovenia’s Katja Fain and she could even dip under 1:54.

World champion Florian Wellbrock stayed atop in the men’s 1500m free – the challengers could not really endanger his triumph, though he was slower than last time (by 7sec). The German genius had become the first male to win gold in the pool and in open water at the same edition of the World Championships (in Gwangju 2019), then he reached the highest heights this August in Tokyo by claiming the Olympic title in the 10km (and winning the bronze in the 1500m beforehand).

“It’s an amazing feeling to be an Olympic champion, I should say. People stop me, congratulate for my gold medal and this great” Wellbrock replied when we asked about his ‘new life’ as an Olympic gold medallist. “I didn’t enjoy too long vacation as there are plenty of events, we have short-course Europeans, short-course Worlds in some weeks, then World Championships and European Championships next year, so there is a lot work to do. Perhaps I can have some rest afterwards.”

“Nothing really changed in my personal life though being Olympic champion, world champion and European champion means that I’ve already achieved many things and it’s a challenge to find motivation. But meets are coming and I can work hard as I want to see if I am able to repeat my win in 2024.”

Then we had a couple of ‘revenges’: Slovenia could celebrate a gold at last as Peter Stevens could finally beat Arno Kamminga, to halt the Dutch winning streak in the breaststroke events. Kamminga completed the treble in Berlin and won the 100m yesterday, but today Stevens managed to out-touch him by 0.03sec – it was his first win after he triumphed in Tokyo in 2018.

And Emma McKeon could hit back to fellow Australian Holly Barratt in the 50m fly – now it was the Tokyo hero’s turn to swim under 25sec so she can have one gold more than last week when she achieved the free sprint double.

With Chad le Clos away because of a shoulder injury, the best finishers of the 200m fly all moved up one rank: Tom Shields won and set to complete the fly treble on Saturday (already won the 100m on Day 1 here), Hungarian prodigy Hubert Kos came second while Louis Croenen, 4th last week, clinched a bronze for Belgium.

The US quartet landed the gold of the session-ending mixed free relay, though the Hungarians – thanks to Milak’s tremendous second 50m – was leading before the anchor leg but the Americans prevailed at the end, while the hosts grabbed their silver No. 4 this evening.