DOUBLE GOLD BOTH FOR SATES AND UGOLKOVA 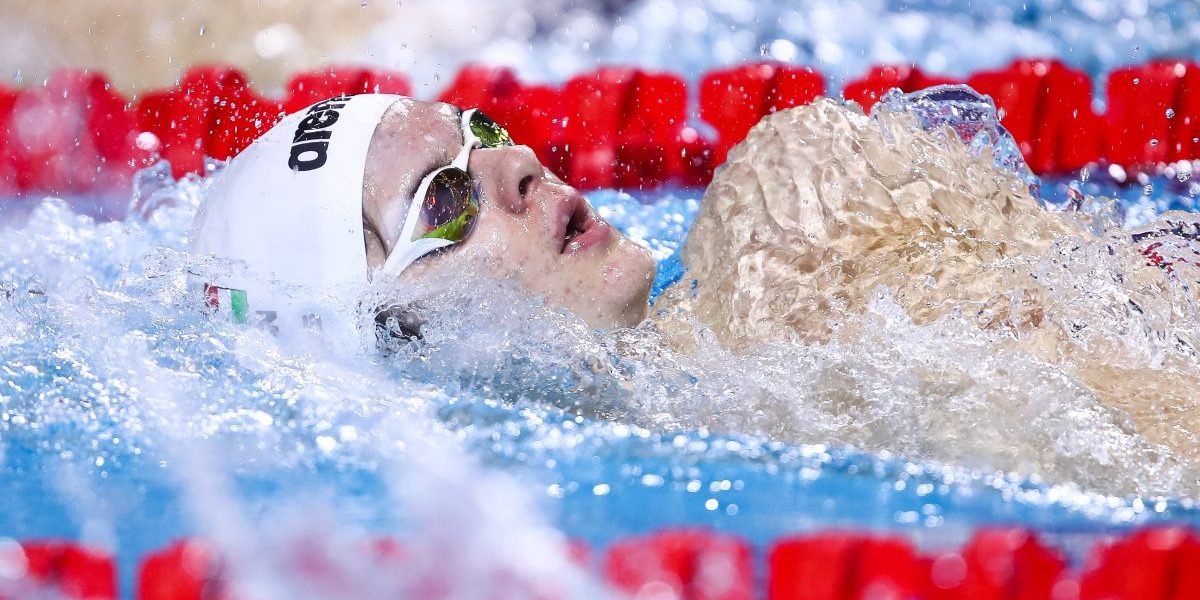 South African Matthew Sates’ dream journey continued in Budapest: he bagged two golds on the opening day in the Duna Arena and brought down one more junior World Record, this time in the 400m free. Maria Ugolkova of Switzerland also enjoyed a fine evening by claiming two titles. Many from the bests in Berlin went on winning here too, like Aussie rockets Kylie Chalmers and Emma McKeon and the Netherlands’ World Cup specalists Arno Kamminga and Kira Toussaint.

Matt Sates amazed many last weekend as he completed the IM treble, earned four golds and a silver while beating two junior WRs. Now the 18 years old is set for more since back in Berlin he had opened his quest with a silver in the 400m free – now he touched in first and smashed the junior WR (3:37.92).

It was a brilliant performance from the youngster as he managed to outpace Danas Rapsys who had been first in Berlin and ruled this event at many legs in the previous season. The Lithuanian was as fast as on last Friday – but Sates geared up and shaved 2.3sec off from his time. And he was back for more: in the session-closing final he retained his 100m IM title, clocking almost identical time as in Berlin (57.77, was 57.78 a week ago).

“I mean, this a dream journey for me” Sates said after his second win. “I did not expect that. Not the records. Perhaps my coach did but he never told me. This FINA World Cup is fantastic, I’m enjoying it so much. There are no big goals set, I just wish to go on and enjoy it. And many thanks for all the attention I receive, it’s an honour to be here and be interviewed.”

It’s yet to be seen how high Matt Sates will get in the world of swimming – but one would barely find any humbler competitor than this young blonde kid from South Africa.
Switzerland’s Maria Ugolkova was also all smiles as he delivered a great double too, won the 200m fly first, then added the 100m IM.
“It’s an amazing feeling” she said. “I swam personal bests, two new Swiss records – it’s fantastic. It’s also great to swim in front of spectators at last, especially here, as the Hungarians can create a great atmosphere.”

Though the roars were not as overwhelming as it had been at the 2017 FINA World Championships, but the Duna Arena became a noisy place when young Hubert Kos stunned the field of the 200m back and won the race on lane 1. The 18 years old Hungarian admitted that he had some special preparations before the series.

“Was a bit bored of swimming when I returned from the Olympics but I did not want to stop completely and spend too much time out of the pool” Kos said. “So we decided to play water polo on a daily basis in the warm-up pool, with the team-mates. Well, that’s a tough sport, I should tell you – and keep you in shape for sure. But I never expected this gold, I thought I may catch a medal but my coach prepared me for this race perfectly.”
There was one more surprise winner from lane 1: Viktoria Gunes in the women’s 200m breast. Though it’s not that surprising if we go back in time and recall the 2015 FINA World Junior Swimming Championships in Singapore where the Turkish girl caused a huge sensation by clocking a better time in this event than the winning effort at the FINA World Champs in Kazan some weeks earlier. She was considered one of the greatest prospects but ever since she had been fading a bit.

“I had some tough years as the transition from junior to senior level is extremely challenging” Gunes said. “I had ups and downs, I wanted things too badly and had to learn some lesson. I got a big help from a Hungarian coach Arpad Petrov, his support was invaluable to be able to find the right perspective. Now I’m swimming for the joy and stopped putting pressure on myself. I’m happy where I am now, and I try to go step by step but without any huge expectations.”

The outcome of these two finals was a rare exception as in the majority of the races the Berlin winners repeated their respective triumphs and mostly the same duels were re-staged from a week ago. Germany’s Isabelle Gose opened the session by winning the women’s 400m free ahead of USA’s Cavan Gormsen. Now it was tighter, the gap had been 1.44 in Berlin, now 0.89, though Gose did a clean job once more.

On the contrary, Netherlands’ Arno Kamminga bested Germany’s Fabian Schwingelschogl in the men’s 100m breast with a bigger margin, it was close in Berlin (0.11), now it grew to 0.58 as Kamminga posted the best effort of the day (56.08), a 960-pointer to win with ease.

The women’s dash saw the same affair, Aussie sprinting queen Emma McKeon speeded up once more, this time her victory was even more convincing ahead of compatriot Madison Wilson (by 0.46sec) and Sweden’s Michelle Coleman (the latter one also landed a silver in the 100m IM).

The Russian, who ruled the sprinting events in the previous years in the World Cup, offered some insights on his current status.

“When the pandemic hit in, I decided to have a long break. I took six months off and it was great. You know, for years, I travelled around the world, was part of each event, participated in each World Cup leg… If I hadn’t done that, I think I might not be here. I needed that break in order not to be burnt out completely.

Dutchwoman Kira Toussaint also retained her 50m back title from last week and USA’s Tom Shields did the same in the 100m fly. This latter one was a great feat as a new challenger awaited the American: while South African Chad le Clos had to sit out with a shoulder injury, the hosts’ Olympic hero Kristof Milak made his first appearance after the Tokyo Olympics where had snatched gold in the 200m fly and a silver in the 100m. Enjoying a longer break and returning the pool only three weeks ago, under a new coach, Milak was no match for Shields this time, Shields’ underwater work was visibly much more effective, a big asset in short-course and won with ease again.

After the conclusion of the session, the organisers staged a special event: a 4x25m free relay featuring representatives of those frontline workers whose incredible efforts during the extremely demanding months of the pandemic cannot be praised enough. Relays of medical personnel (doctors and nurses), policemen, firefighters and teachers were cheered loudly by the spectators – at the end, the police officers won the race, ahead of one of the medical teams.

The runners-up included Professor Bela Merkely, himself a Masters water polo player, who is also the rector of the Semmelweiss Medical University which provides the medical services at this World Cup event too. A proof that aquatics is a great source of all kind of talents – which was also underlined at the opening ceremony, where three former swimmers held speeches: FINA President Hussain al-Musallam, Minister for Sports Tunde Szabo (Olympic silver medallist in Barcelona) and Hungarian Swimming Association president Sandor Wladar (Olympic champion in Moscow).