SPECTATORS ARE BACK, DUNA ARENA IS READY FOR THE SHOW 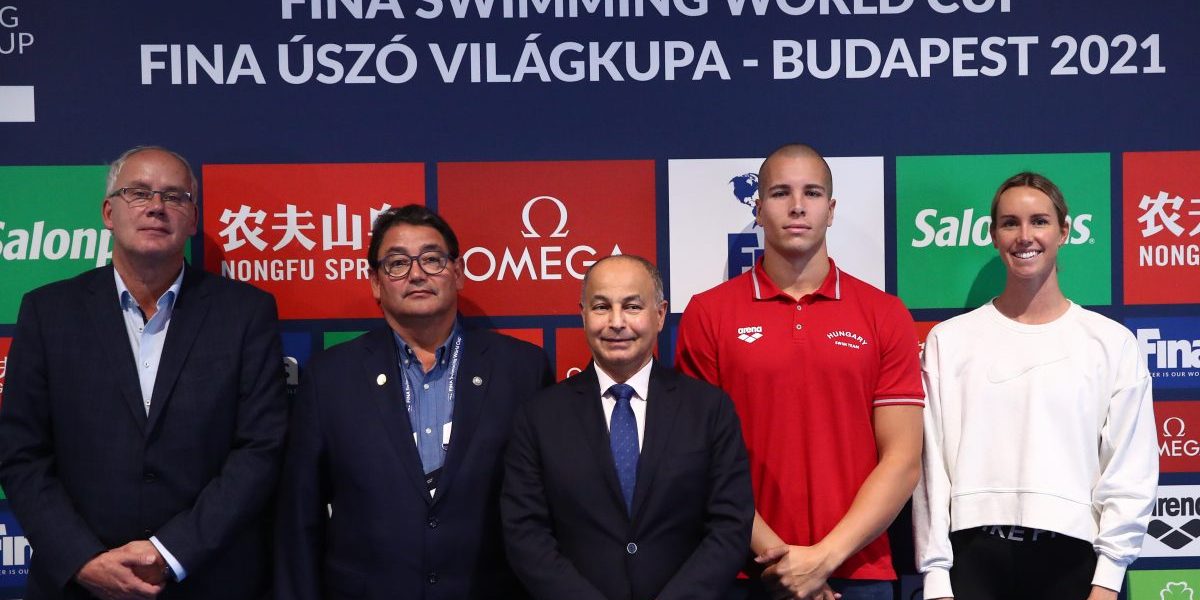 For the first time in long months, a major FINA swimming meet will be held in front of spectators – the second leg of the 2021 FINA Swimming World Cup in Budapest may enjoy the usual vibrant atmosphere in the magical Duna Arena.

“After two years, fans can return to the stands, I think this is the most important news I can share before the start of the World Cup” Hungarian Swimming Association President Sandor Wladar said at the opening press conference. The president, Olympic champion backstroker from 1980, added: “We are very happy that this event is back, and we will see heroes from Tokyo, as well as numerous Hungarian talents in the races.”

FINA President Husain al-Musallam was grateful for the athletes to have already produced excellent races in Berlin and for they are ready to offer their very best here in Budapest too. “Let me thank the Hungarian Swimming Association, the city of Budapest, the Hungarian Government and the Semmelweiss Medical University for their support” the President said. He also talked about the recently held meeting in Lausanne where the FINA Reform Committee submitted several recommendations. “We are committed to support our athletes, coaches, officials, we want to see that all of them being treated equally, all disciplines being treated equally as we consider ourselves a real family” Mr al-Musallam said.

The best female swimmer of the Tokyo Olympics Emma McKeon of Australia was happy to be part of the show in the World Cup series. “After the Games I had two weeks of quarantine then I visited my family and spent three weeks with them before returning to the pool” said McKeon, winner of seven medals (four of them gold) in the summer. “Honestly, I was a bit amazed with my speed in Berlin, after having five weeks off, I managed to do a personal best in the 100m free. Perhaps it can still be owed to my pre-Olympic work.”

Local hero Szebasztian Szabo, claiming several medals in Berlin, is set to return to the venue of his biggest success so far: back in May he had become European champion in the arena in the 50m fly. At the Games he had mixed fortunes, as he recalled: “The free relay was a great hit, the 5th place was amazing, while my individual event did not go well, I wanted much-much more than just a semi-final in the 100m fly. Then I had four weeks off, it was perhaps a bit longer than it should have been, but now I’m back. I enjoyed racing in Berlin, I was slightly off on my PBs but I hope that in front of the home fans I’ll be able to better one or two personal bests.”

The three-day bonanza will offer more than the official competition: on Thursday, at the end of the session, a special relay will be staged, featuring the frontline workers who were the real heroes of the past one and a half years. Doctors, nurses, policemen and teachers will swim the special 4x25m relays. One of the “medical teams” will have Professor Bela Merkely in its line-up: rector of the Semmelweiss Medical University (also the Chief Medical Officer of the 2017 FINA World Championships), he and his team has been responsible for ensuring the Covid-free environment at several aquatic meets in this season.

“Aquatics benefitted a lot from the services we provided, and we also learnt many things how to manage this kind of events to guarantee the safety of the participants” Professor Merkely said. As for his relay appearance, he added “many thanks for the organisers to limit the distance to 25m, that’s much more fitting than a request to swim a 400m IM… Though I started swimming at the age of 3, water polo at the age of 7, and I’m still a Masters player so I’m kind of prepared for the challenge. At the same time, let me declare it again: swimming is the healthiest sport you can have, one can begin it at an early age and it can remain a life-long activity.”

One more special race will be added to the official programme: on Friday, the local fans can bid farewell to Laszlo Cseh. Hungary’s living legend called it a day after he completed his 10th Olympic final at his fifth Olympics in Tokyo – but he didn’t have the chance to wave good-bye to the fans who has been always rooting for him during his amazing 19-year-long senior career. Medallist at four Olympics, two-time world champion, owner of a total of 71 medals at major FINA and LEN events, Cseh will swim a last 100m IM in the Arena – in a circle of surprise rivals at the end of the Friday session.

The second leg of the FINA Swimming World Cup in Budapest will run from Thursday till Saturday, heats start at 9.30 each morning, while finals are scheduled for 17.45. Stay tuned and follow all the actions here at the FINA website, as well as on our social media platforms.