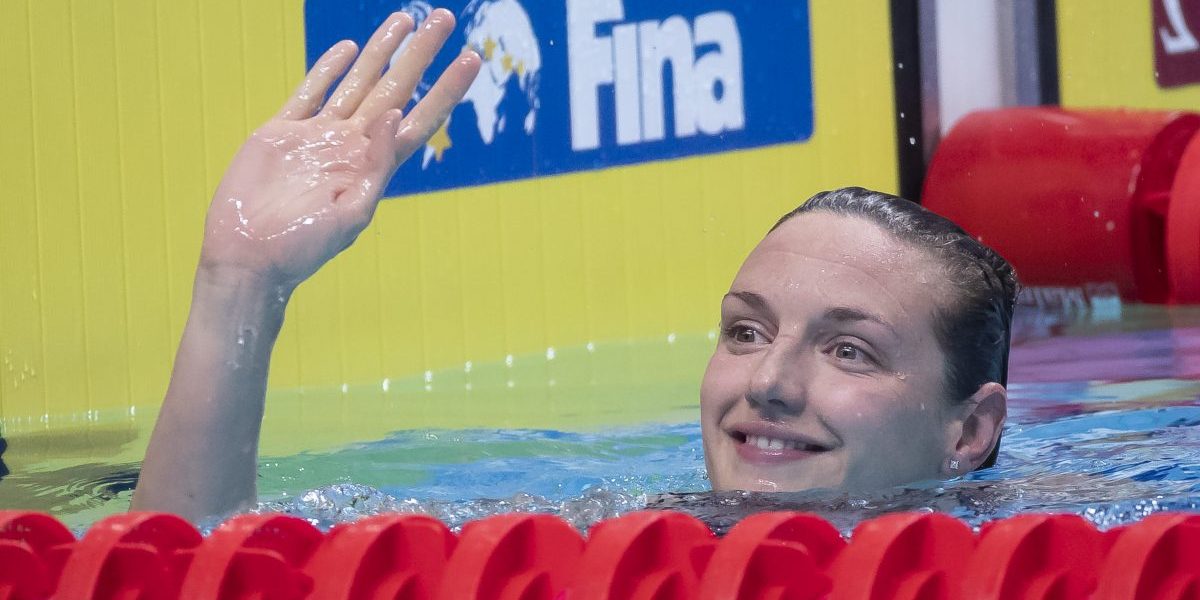 These are the days the FINA Swimming World Cup has been created for: 4,000 fans on the stands, brilliant action in the pool, outstanding performances from the stars in an electrifying atmosphere. Overall leaders Vladimir Morozov and Katinka Hosszu offered something special: the Russian won the 50m back and 100m free, while the Hungarian claimed her 4th 400m IM title in the season, got a bronze in the 100m back and anchored the Magyars’ 4x100m mixed free relay to a stunning 0.02sec win. These two nations had three title apiece on Day 2, just like the Netherlands.

The first event immediately brought electrifying moments to the Arena – even though it was to be just another 400IM victory for Katinka Hosszu, but the recent weeks had created some extraordinary hype around her and her former husband and coach Shane Tusup. The American returned to the scene in Italy, taking over the coach’s job of Ilaria Cusinato who was just a couple of hundredth behind Hosszu at the 2018 European Championships (but that was Hosszu’s weakest summer since ages for the known reasons)

Hungarian press started guessing Tusup’s motives and he revealed those soon as he started to build a team involving Magyar swimmers too and his choices demonstrated that his core target was to somehow hit back onto his former swimmer and ex-wife. Since this whole bonanza had come public, this Saturday brought the very first clash between Hosszu and Cusinato and the spectators, some 4,000 fans turned up for this Saturday, gave a standing ovation to Hosszu and froze the air when the Italian entered the pool deck. However, it turned out quickly that they were not on the same level, indeed Cusinato was left way behind, it was a one-woman show as usual for Hosszu who cruised to victory with a fine time. She made a 1-2 with fellow Hungarian Zsuzsanna Jakabos, just like in Jinan and Singapore, much to the joy of the crowd. Cusinato came fifth, 14 seconds later – in fact, Hosszu’s 4:34 in October in the gruelling event is a strong message, while for Cusinato there is a huge gap to fill here in the coming months…

The men’s 1500m free had to go to Florian Wellbrock though at this phase of the year nothing can be taken granted even for the world title-holder. However, the German did a clean job, raised his speed after 1000m and left the other behind and produced the only sub-15min effort this afternoon.

After the longest distance, a fine dash race followed and Vladimir Morozov pulled off another great win – even though it’s only 50m, just like a day earlier in the free, the Russian Rocket was a cut above the rest, his 24.70 was a brilliant effort indeed.

Veronika Andrushenko made it back-to-back for the Russians as she clinched the 200m free title, despite some pressure from Zsuzsanna Jakabos who trailed by 0.24 sec at the wall, a great feat just half an hour after her silver medal in the 400m IM.

Michael Andrew a little bit surprised many as he earned a nice win in the 200m IM. The American was a specialist in the sprint events with his now famous special training method (Ultra-Short Race-Pace Training) calibrating the athlete to fast bursts in the pool. However, the American – man of the meet at the 2017 junior Worlds in Indianapolis – proved his versatility and ability as he managed to finish ahead of the events’ specialists.

Just like the Russians, the Dutch also produced back-to-back wins and both completed a 50-100m double for the respective champions. First Kira Toussiant touched home in the women’s 100m back then Arno Kamminga added the men’s 50m breast to his title claimed in the 100m on Friday. What’s more, Ranomi Kromowidjojo made it three for the Netherlands after the first award ceremony as she sailed to a triumph the 50m fly.

It was Morozov’s turn to level the Russian-Dutch duel to 3-3 in the 100m free, perhaps the most highlighted event of the session. But it turned out that the clock was Morozov’s lonely rival and he stopped it at 47.99, an amazing achievement in an October race, just 25 minutes after a 50m back win (and a long trip from Los Angeles).

Recalling the good old days when Finnish swimmers were among the celebrated stars of the World Cups, Ida Hulkko stunned many – even herself – as he managed to triumph in the 100m breast with a great performance.

And to secure a golden frame to the day and to get the crowd on its feet once more, 2010 Youth Olympic champion Bencze Biczo produced one of the most breathtaking finish of the meet so far. He turned 4th at the 150m mark and trailed 2.5sec to race-leader Daniil Pakhomov but Biczo managed to unleash an incredible last leg and out-touched the Russians by 0.02sec while Czech Sebastian Lunak came a further 0.02sec adrift – the top three hit the wall within 0.04sec in a 200m fly race, that’s something people loved very much. Especially with a Hungarian in front – worth noting that the host nation, ruler of the 200m fly in Gwangju, showed something special: with the top three folks being away (Kristof Milak skipped this event, Tamas Kenderesi and Laszlo Cseh skipped the meet), the Magyars still had a winner in this distance.

And what no one expected, the home heroes also made it three by keeping the mixed free relay’s title at home. As usual in relay events, fans went wild once they smelled that the Hungarian team could cause an upset. And as soon as Katinka Hosszu touched home first ahead of the Russians – the winning gap was 0.02sec, just like in the 200m fly – the roars nearly brought the house down.