STARS ARE READY TO ROCK IN DUNA ARENA 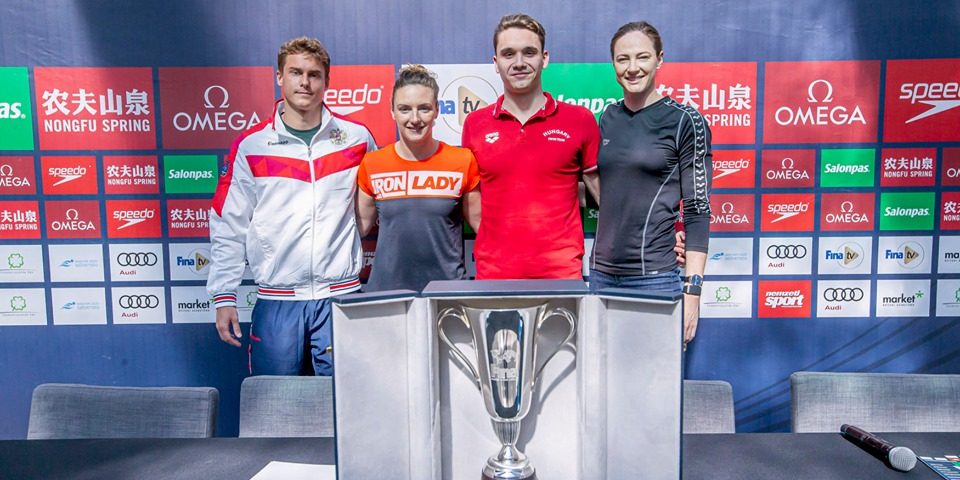 Here we go again: swimming, Duna Arena, World Cup, the greatest stars – it won’t be any better than this. At least all hope that the fourth stage of the FINA Swimming World Cup is going to be another hit in Budapest this weekend, and the star-studded line-up might be a guarantee for that – this was also revealed at the opening press conference of the event.

From time to time world-class swimming returns to Budapest, as Sandor Wladar, President of the Hungarian Swimming Association – former Olympic champion backstroker – said, it’s unique if not a record that a national federation hosts four top level FINA meets in a calendar year. “Swimming World Cup a year ago, Champions Swim Series in May, junior World Championships in August and now back to the Arena again – no wonder, this is somewhat understandable that FINA has its trust in us and the swimmers love to compete here as we have great facilities and the Hungarian fans are really able to create a brilliant atmosphere. I hope this edition of the World Cup is going to be another unforgettable event.”

Katinka is currently leading the overall and she said that her focus was on maintaining her No. 1 position. “I entered less events this time than usual as I face a firm challenge from my rivals but I really want to stay atop after this cluster.”

Milak is back in action for the first time after his outstanding performance at the FINA World Championships in Gwangju where he brought down one of the mightiest world records of the sport, bettering Michael Phelps’s 1:51.51 global mark from 2009 by clocking 1:50.73 in the 200m fly. However, there is no 200m fly this time but plenty of other events.

Two of the fastest swimmers on Earth also attended the press conference – and both are contenders for the overall title too. Aussie Cate Campbell is trailing only six points to Hosszu after the first cluster and she is really keen to catch up the Hungarian World Cup specialist.

Same applies to Vladimir Morozov. The Russian Rocket is ranked first in the overall after the first cluster but at major events he lacks some luck in the individual finals – though had plenty of medals in the relays.

The stars all expect some great time in the Duna Arena – Campbell is thrilled to compete in Budapest for the first time as she missed the 2017 edition of the Worlds – so it’s going to three days of magnificent swimming action here in Budapest.