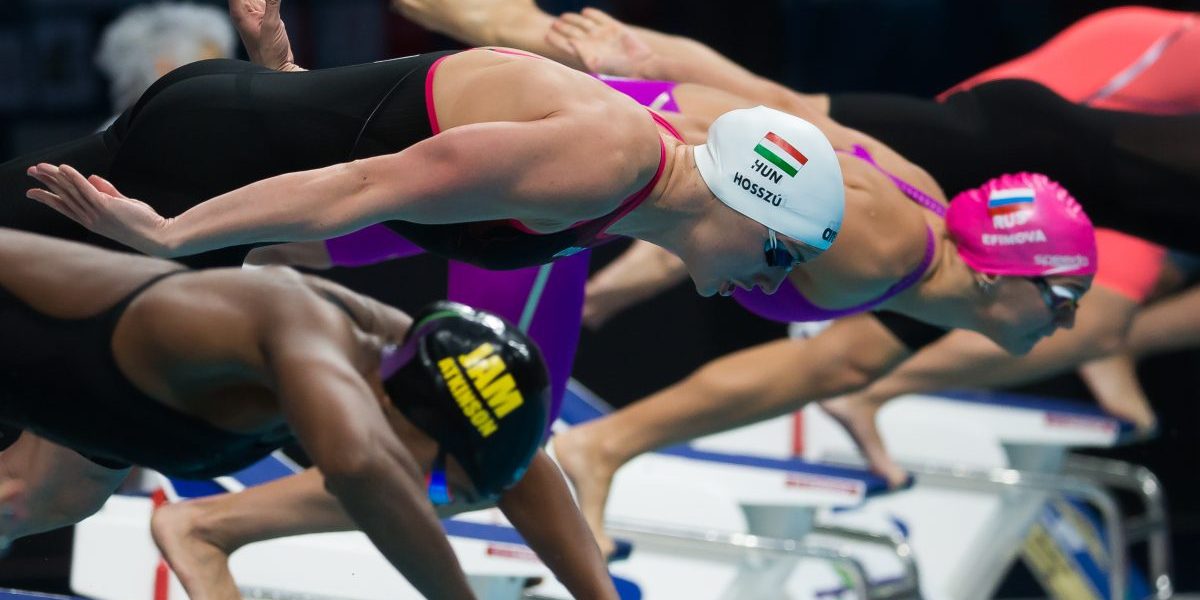 Sweden’s Sarah Sjostrom and Russia’s Vlad Morozov are well in the lead in the overall – and Morozov is set to win the second cluster – they won a gold apiece on Day 2 in Budapest as well but were pipped for the title in one of their trademark events. The grand Aussie trio enjoyed another great session, Mack Horton, Emily Seebohm and Mitch Larkin all collected their second respective win in Budapest – just like Chad le Clos (RSA) and Felipe Lima (BRA). Katinka Hosszu (HUN) made it three with another victory, much to the delight of the crowd.

Home star Katinka Hosszu secured an electrifying atmosphere right at the beginning by winning her favourite 400m IM with ease. With compatriot Zsuzsanna Jakabos coming third, some 3,000 fans on the tribunes made tremendous noise and despite the Hungarians didn’t clinch any more titles in the rest of the session, the roars didn’t cease later on, especially when the living legend of the Magyars Laszlo Cseh claimed silver in the 200m IM.

Aged 33, Cseh was still up to the task and only Mitch Larkin could get to the wall ahead of him. The Hungarian ace – the only swimmer in history capturing medals in eight consecutive FINA World Championships (since 2003, still counting) – returned to the pool a bit later to come 4th in the 200m fly. “It was as painful as it could be and now I see I had to train an awful lot to return to my best shape again” he said and one’s just wondering how this outstanding athlete can find motivation to push himself to the limits again and again.

Hosszu was also back for more, she got two more bronzes, one in the 100m back then, sending the crowd to the seventh heaven, in the 4x50m mixed free relay.

The current leaders of the overall Sarah Sjostrom and Vladimir Morozov did a good job respectively as the Swede won an outstanding race in the 200m free, passing Femke Heemskerk (NED) over the last lap. It was a huge effort from Sjostrom, however, later in the day the other Dutchwoman Ranomi Kromowidjojo stunned her for the second time in two days. ‘Kromi’, as everyone knows her, had bettered Sjostrom in the 50m free and did it again, this time in the 50m fly, perhaps an even bigger upset.

Vladimir Morozov went through something similar: he won the 100m free with a pretty good effort (45.30, just 0.36 shy of Amaury Leveaux’s brutal shiny WR from 2008) but before that he had to bow to USA’s Michael Andrew in the 50m back, also a pet event for the Russian. Andrew, the dash specialist, did a fine job. “It was a good swim, I’m happy with the race as it’s a big personal best for me” he said. The young American was the man of the meet last year at the junior Worlds in Indianapolis, on his transition to the tough world of the seniors he said: “I think it’s all good, I achieved some pretty good results at the Nationals then in the Pan Pacs which obviously meant a great boost for my pro career and showed I was already capable of doing some serious business in long-course meets. Now I’m about to prove that in the World Cup too.”

As for the overall standings, Sjostrom enjoys a substantial lead (204-162 over Hosszu) but in the second cluster she trails by 12 points to Chinese WR-breaker of Day 1 Wang Jianjihae, with one day to go. At the same time Morozov already secured his win in the cluster (leads by 50 points ahead of Mitch Larkin) while in the overall the difference is even bigger (62) between him and the Aussie.

By the way, the Aussie crème de la crème showed some quality once again. Mack Horton added the 1500m crown to his 400m win from yesterday. “This was another journey as I barely swam 1500m in short-course” said Horton (once a top male at the junior Worlds too, back in Dubai 2013).

Mitch Larkin also claimed his second gold in Budapest, the backstroke king conquered the 200m IM this time and to the question if this is the beginning of something new in the future, he responded with a broad smile: “Shhh, maybe this is going to be my next favourite event in the following season. I think this swim was all good, in Eindhoven I took it too easy in the heats and didn’t make the final. Came ninth, pretty upsetting it was, so this win was also a kind of redemption for that.”

Emily Seebohm had won the 50m back on Day 1 and now bagged the gold in the 100m with a brilliant finish ahead of Kathleen Baker (USA) and Hosszu. Seebohm was in upbeat mood understandably: “It’s great to swim here since I have so many great memories from 2017, and especially racing against Katinka and hearing the crowd roaring it’s awesome. It’s always fun to swim in the World Cup and achieving good results. It’s also a preparation as I want to make the team for the short-course Worlds at the trials then I go for the third cluster and hopefully finish the season at the Worlds in China. So it’s not just fun but also a busy part.”

As for the other victors of the day, Jamaica’s Alia Atkinson earned a clean win over 200m champion Yulia Efimova (RUS) in the 100m breaststroke. “I swam short-course a year ago for the last time so first of all I wanted to make sure that I’m fast enough if not faster than in the same part of last year. Time-wise it’s all good, I’m there where I want to be at this stage and hope in the third cluster I’ll get closer and closer to the world record” she said.

Brazil’s Felipe Lima completed the 50-100m double among the men: “I’m enjoying this part of the season, we have plenty of good races and here it’s very special to swim as the place and the crowd is awesome.”

Chad le Clos did the same in the ‘upper’ part of the fly, adding the 200m title to the 100m from Day 1. The South African was below the WR split over the first half of the race while winning comfortably on lane 8. “No, the record wasn’t in the cards but I definitely wanted to win as I know that the Japanese (Seto and Yajima, finishing 2-3) arrived here tapered while I’m not in my best shape currently. And I wanted to send them a message that I could beat them even when they are tapered and in-form so for me this win was a big step for this reason.”

Then the young kids flooded the scene to catch Chad – the town’s favourite here among the foreign stars – for a photo. Shortly before that, when the Parade of Champions was over, one of the basket-carrier kids left the scene absolutely overjoyed as together with the others she could clap her hands with all the medallists.