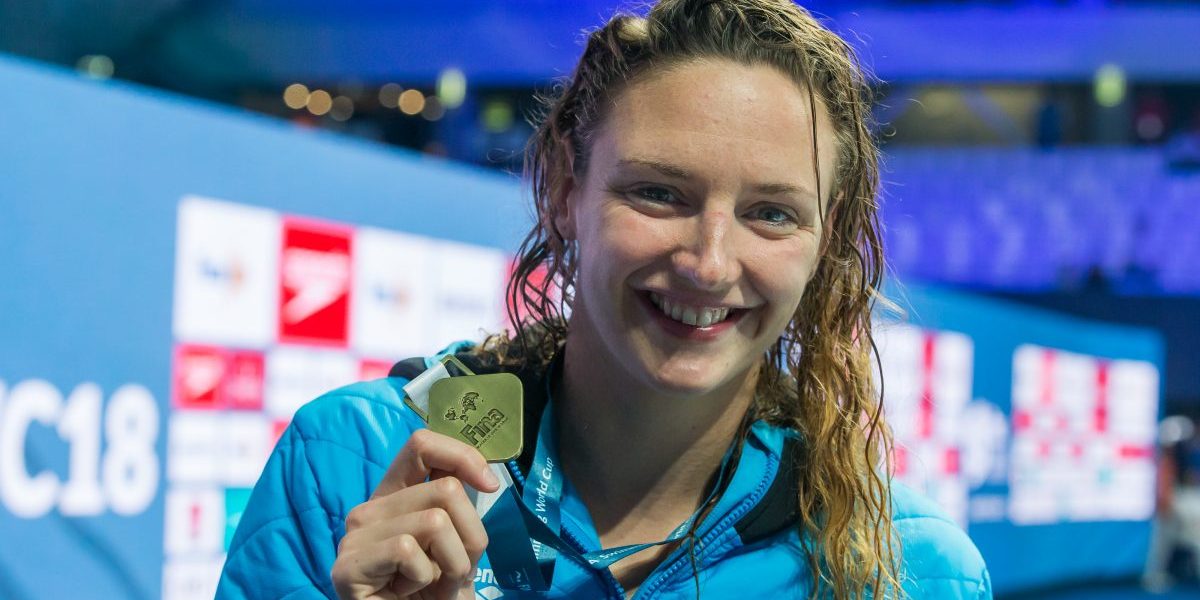 Quite a swim to start the evening session off with: China’s Jianjiahe Wang rushed ahead right at the beginning and never looked back in the women’s 400m free. In fact, she didn’t look at her splits either during the swim but she was well under the WR splits all the way. Though the virtual red line ‘came closer’ in the last lap but she held on for a new global mark, a first ever 3:53 swim from a female.

The 16 year-old was all smile, one week after having set a new World Junior Record in Eindhoven, she crushed Mireia Belmonte’s five year-old senior mark by more than half a second and was glad to accept the US$10.000 check on the pooldeck.

The men’s title landed in Mack Horton’s hands, the long-course Olympic champion was a clean winner though this is his first adventure in the small pool. “For me it’s a learning experience as I never swam short-course before. Different strokes, different techniques, so I try to gain some speed here” Horton said.

The 100m IM finals lit up the Duna Arena just as last year at the World Champs. The women’s final produced an outstanding race, home hero Katinka Hosszu clashed with her biggest rival in the overall Sarah Sjostrom. The Swede led until the 150m turn so the Iron Lady seemed to be in trouble against the fastest sprinter while facing the freestyle leg but she gave her best and touched the wall 0.11sec ahead of Sjostrom. Hosszu claimed her 400th World Cup medal in style, the crowd roared while Katinka waved to the fans.

“I knew Sarah really wanted to catch me at home in this event so I was aware that I had to give all I had” Hosszu said. “I think my experience in the medley event helped me a lot as this is all in all a sprint event and Sarah is a sprinter unlike me, but at the end my medley skills made the difference.”

Hosszu added a second title later as she won the 200m fly with a great finish – here the victory ceremony was special as she received her gold from a true legend, 5-time Olympic champion Krisztina Egerszegi.

The other double went to Vlad Morozov who came first in the 100m IM and in the 50m free. The Russian rocket is in a great shape, he was just 0.06sec outside of his own WR achieved last week in the medley, then he broke a 9-year old World Cup record in the dash (20.51), this time he was 0.06 sec inside Roland Schoeman’s effort from Berlin 2009.

“I’m pretty happy with my performance, I was close to the world record in the medley, but I don’t mind that I couldn’t make it this time” Morozov said. “It was a good swim after all.” Then, setting his eyes on the prize put on show next to the pool, he added with a smile.

His closest rival in the overall in recent years, South Africa’s Chad le Clos won the 100m fly with ease, amidst huge applaud from the public. “I need to fix a couple of things but above all I’m happy with the swim” Chad assessed his performance. “I’m always happy to return to Budapest, there are so much passion in the people in the arena, it’s always a great experience to be here.”

“At this stage of year there are a lot of trainings so the time is OK though I wanted to have a bit better” said the Aussie world champion, also pointing towards his abdominals saying “I’m not in the best shape here…” Though he added: “Any time below 1:50 is something you have to appreciate.”

The breaststroke events saw Russia’s Yulia Efimova’s gaining 1.55sec on her compatriot Vitalina Simonova in the 200m while Brazil’s Felipe Lima stunned the others from lane 7 while winner of the first cluster, Russia’s Anton Chupkov finished runner-up on lane 1.

The women’s 50m free produced some surprise as 2012 Olympic champion Ranomi Kromowidjojo showed something from her good old form while upsetting Sarah Sjostrom by 0.13sec.

The day ended with a special race, the so-called ‘Eric Challenge’ where Eric, the Eel – Eric Moussambani, famous for his 1:52m 100m free from Sydney 2000 – raced against Hungary’s prominent athletes from other disciplines including 2018 speed-skating Olympic champion Sandor Liu Shaolin and London 2012 Olympic gold medallist gymnast Krisztian Berki – but the first place went to Balazs Baji, world bronze medallist in 110m hurdle, who prepared with Katinka Hosszu for this challenge – a perfect place to learn the winning tactics.