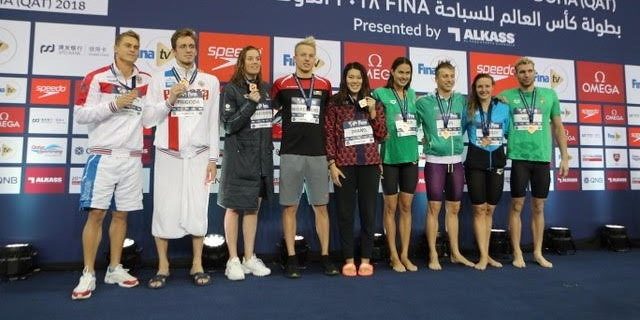 The second leg of the FINA Swimming World Cup 2018 concluded today at the Hamad Aquatic Centre in Doha (QAT). Katinka Hosszu, from Hungary, was the star in the Qatari capital, by attending 15 finals and winning seven gold, one silver and four bronze.

The first final of the last day was the men’s 400m individual medley, where the Hungarian David Verraszto won the gold and established a new world cup record in a time of 4:13.44. The silver medal went to Maksym Shemberev from Azerbaijan with 4:13.61, and the bronze was for Tomas Peribnio Avila from Ecuador in 4:17.02.

Hosszu won three gold medals and two bronze in the final day. She first won the women’s 800m freestyle with a time of 8:34.58. The second was the Chinese Chanzhen Zhou with 8:35.67 and the bronze went to Spain’s Andrea Galisteo Zapatero with 8:43:99. Katinka’s second gold came in the final of the 200m backstroke, in a winning time of 2:11.00, followed by Kira Toussaint from the Netherlands with 2:13.24 and the Chinese Yuru Jiang with 2:14.54. The seventh gold medal for Hosszu was achieved in the 200m individual medley with a time of 2:11.57.